So now that the biggest nature-themed event of 2017 is finished, we can all throw our rad NASA certified eclipse goggles into a drawer until 2024, when the next eclipse is due, and move on with our lives. Correct?

Nature is a cruel mistress, and if we think we can get away with a little entertainment and not pay the price, we have another thing coming to us. Over the next several days, there may be droves of patients presenting with the chief complaint of: “Help, I looked at the eclipse through [a roll of toilet paper, binoculars, used film, four sets of sunglasses taped sequentially together] and now my vision is blurry, my eyes hurt, and there is a black spot in my visual field.”

This process is not a direct thermal burn, but a photochemical toxicity. Both UV light and blue wavelengths of visible light are absorbed in the retina, and the high energy of the light generates free radicals, which in turn disrupt established molecular bonds in the RPE (retinal pigment epithelium) and photoreceptors. The fovea, which is the small retinal depression where the visual acuity is highest, seems to be preferentially affected.

A good clinical history will usually elucidate the nature of the injury. Given the large number of people staring directly at the sun, this week’s patients all have a solid story. However, this can happen with welding without a helmet, or even repeated exposure to flash photography. Symptoms usually occur within several hours after exposure, and include blurry vision, a central scotoma, or metamorphopsia, which is a phenomenon where a grid of straight lines may appear wavy to the patient, and certain parts of the grid may appear blank.

Clinically, the best test to perform in the ED is a simple visual acuity test. Acuity will often be diminished in one or both eyes, usually in the range of 20/25-20/100. The degree of acuity will depend on the strength of the light exposure, and obviously the duration. Performing a slit lamp exam may be helpful, but not always. Acutely, the retina may appear normal with mild macular edema. However, as time goes on, a central yellow spot at the fovea can emerge, which then turns into a central red spot with a surrounding halo. This is considered pathognomonic for solar retinopathy. 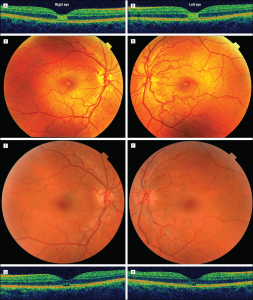 The top two pictures show the initial yellow ring, which in time, dulls to a smaller red ring with the surrounding halo around the fovea (bottom two).

But what do we tell our patients once we have nailed this diagnosis? Does ophthalmology need to see the patient in the ED? The answer is likely, “no.”

If you are fairly certain about the cause of the vision disturbance, there is really no management for Solar Retinopathy except for serial exams and monitoring. Within a year, these patients usually have full vision recovery, however, a small number of them may not recover vision fully, or be left with a central scotoma.

Medication wise, there are tepid mentions in the literature about giving steroids, however, I would never give them without definitive discussion with ophtho, given that steroids can cause worsening macular edema or potentially contribute to central serous chorioretinopathy in patients with solar retinopathy, based on a case report.