Traditionally, central line placement in the subclavian vein (SCV) involves a landmark-based approach in which the needle is guided under the clavicle. For the U/S lovers, there is an alternative approach to the subclavian in which the sono may be utilized: the supraclavicular subclavian.

Anatomy: The goal is to cannulate the SCV just lateral to clavicular head of the sternocleidomastoid muscle. The right SCV is preferred as it forms a straighter angle with internal jugular, and thus a shorter path to the superior vena cava. Furthermore, the thoracic duct, a structure you would prefer not to damage, drains into the the left SCV. You aim just lateral to where the ext jugular vein joins the SCV.

Technique: As always, perform standard sterile and needle precautions to minimize harm to yourself and to the patient. With the linear probe, start by visualizing the internal jugular and following it inferiorly until your ultrasound abuts the clavicle. You should see the confluence of the IJV and SCV forming the brachiocelphic vein. You may angle posteriorly to visualize the pulsating subclavian artery to confirm your position (figure 1a). Then angle anteriorly to identify where the external jugular enters the SCV for the ideal location for cannulation (see figure 1b). Reposition, and then enter the skin slowly and follow your needle tip with the in-plane technique (this should be easier than most standard in-plane tracting of the needle as your needle and U/S probe are pushed against the clavicle. From there you may use your standard confirmation of adequate placement techniques (eg, manometry, aspiration, visualization of the guide wire in the SCV). Get the post-placement x-ray to r/o ptx and confirm placement. 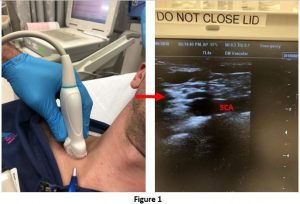 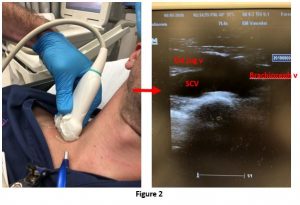 Consider the supraclavicular subclavian when your go to IJ isn’t an option (abnormal neck anatomy, IJV thrombosis, presence of a c-collar).

Thank you Ryan for lending me your beautiful veins!!!