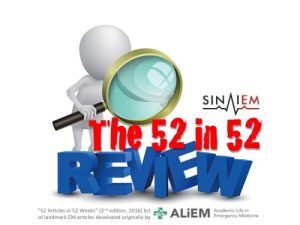 What we already know about the topic: BNP (Brain or B-type Natriuretic Peptide) is now routinely used to support the diagnosis of CHF exacerbation in the ED and in-hospital setting. This, despite a 2016 Cochrane Review suggesting that the evidence supporting its impact on patient centered outcomes remains weak (https://www.ncbi.nlm.nih.gov/pmc/articles/PMC5449577/). At the time of this study publication, 2002, BNP was not widely used.

Why this article is important: This study helped establish the practice of using BNP to diagnose an acute CHF exacerbation and established the initial assay cut-off level. It remains one of the higher quality studies in the 2016 Cochrane Review.

Brief Overview of the study: Prospective, blinded, non-randomized cohort study. 1586 patients at 7 centers from 1999-2000 who presented to the ED with a complaint of dyspnea had their BNP level tested. Their clinicians, blinded to BNP results, estimated their confidence that the dyspnea was due to CHF. Two cardiologists at 30 days, also blinded to BNP results, decided if the patient’s symptoms were due to CHF. Sensitivity, specificity and PPV for an ED provider who was 80-100% confident the cause was CHF were 49%, 96% and 91%, respectively. Sensitivity, specificity and PPV for BNP >100 pg/ml were 90%, 73% and 75%, respectively. BNP was found to increase an ED provider’s ability to identify CHF as a cause of dyspnea in the ED.

Limitations: (1) CHF lacked, and continues to lack, a true “gold standard” diagnostic test. The gold standard used was the independent assessment of two cardiologists. This could bias the results in either direction. (2) Even at a very low cut-point, the sensitivity of BNP was only 90%, suggesting that a significant number of CHF exacerbations as defined in this study will still be missed. (3) CHF exacerbation remains a very broad diagnosis, so this study does not help us decide how to treat the patient in question.

Take-home points: BNP can usefully augment clinical decisionmaking regarding the cause of ED dyspnea, especially when the provider is uncertain about the diagnosis of CHF based upon other data.