A 51 year old female with a history of diabetes presented to the ED with acute onset of left eye painless blurry vision.Â Vitals were within normal limits.Â Fingerstick was 450.

On exam : Visual acuity was 20/30 in the right eye but could only count fingers in left eye at 1 foot. There were no external signs of trauma, conjunctivitis or proptosis. Pupils were equal and reactive to light.Â Ocular ultrasound of her right and left eyes were performed and shown below: 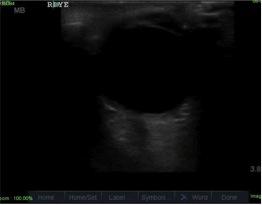 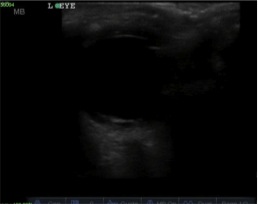 IN the left eye a bright echogenic linear structure can be seen floating in the posterior aspect of the globe. Â This was concerning for retinal detachment, which is a clear ocular emergency. Ophthalmology evaluated the patient in the emergency department and diagnosed a vitreous hemorrhage. The patient was discharged home.

How do you tell the difference between a vitreous hemorrhage and a retinal detachment?

First, a little anatomy of the eye:

The vitreous is a clear, gelatinous, and avascular substance, filling the space bound by the lens, retina, and optic disc. The retina is composed of multiple layers that form the posterior wall of the globe behind the vitreous. A retinal detachment occurs when these layers separate.

There is an internal membrane that separates the retina from the vitreous. This forms a potential space between the membrane and the vitreous called the subhyaloid space.

Ocular ultrasound is a quick and accessible way to assess ocular pathology. In patients with acute visual change, evaluation for retinal detachment is important to prevent complete and possibly permanent visual loss.

Ocular ultrasound is highly sensitive in the detection of retinal detachment in the ED.

In an intact globe, the retina cannot be differentiated from the other choroidal layers on ultrasound.

Ultrasound of retinal detachment will show a thick hyperechoic membrane floating in the posterior globe. It never detaches from the optic nerve posteriorly.

Vitreous hemorrhage may layer and form a hyperdense linear density that can mimic a retinal detachment.

Decrease the gain to help differentiate between the two.

Vitreous hemorrhage is usually less dense and will fade as the gain is decreased. It usually layers inferiorly with gravity. Ocular movements produce a rapid, staccato motion of the hemorrhage, unlike a retinal detachment that is stiffer and slower in movements.