Radial head subluxation, more commonly known as nursemaid’s elbow, can be seen more frequently in the pediatric population. Imagine a parent quickly pulling a child’s arm (usually 1-4 years old) that was held in extension in order to prevent a fall — the kid then holds their forearm in the pronated position and close to the body. What happened?

The radial head subluxed from the annular ligament, which is now trapped between the radial head and the capitellum (into the radiohumeral joint). 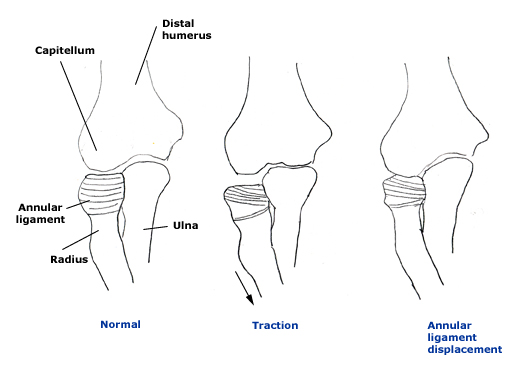 By 5 years old, the ligament is usually thicker and stronger, and so this is less likely to happen after that. Falls and being swung by the forearms can also cause this injury.

Physical exam reveals passively range of motioning the elbow is normal, but supinating the forearm causes pain. There should NOT be bony tenderness or swelling. You usually do not need imaging for this diagnosis.

A systematic review was  published in Annals from this month and found that of the two most commonly used techniques, the hyperpronation technique is more effective than the supination-flexion technique.

One arm supports the elbow and uses one finger to place pressure at the radial head. The other arm performs either maneuver, which is as the name suggests. Either hyperpronate the forearm or supinate followed by immediate flexion. If you are doing the supination-flexion technique, there should be slight traction. You should feel a click when it reduces. Here’s a video to help: https://www.msdmanuals.com/professional/multimedia/video/v23370720

How do you know if its successful? The child will move their arm. Sometimes it can take a few minutes for them to realize it doesn’t hurt. Consider offering them some toys to play with to get them to range their forearm.

What if they still won’t use their forearm after about 20 minutes? Get an Xray to now rule out fracture (nondisplaced supracondylar fractures are the most common fractures initially misdiagnosed as radial head subluxations). If there’s no fracture, perform the reduction again. The review found that hyperpronation had less failure in both the first and second attempts. So if you failed the hyperpronation reduction once, try that same technique again because you have about a 70% chance of success on the second attempt from this. If you failed at the supination-flexion attempt once and try the same one again, your success rate is only about 30%.

Do they need slings or orthopedic follow up? No, just teach parents how to avoid it in the future.