Lets be honest: whether you like it or not, it’s a rare day working in the ED when you don’t guaiac someone. To “guaiac them” is of course slang for performing a point of care fecal occult blood test. Its a valuable tool and can yield useful clinical information when used appropriately. But do you know this tool works?

Fecal occult blood testing utilizes a paper strip coated with alpha guaiaconic acid to which you apply a hydrogen peroxide reagent to the paper. If blood is present then the heme present in blood catalyzes the conversion of alpha guaiaconic acid to a blue colored quinone called guaiacum blue. In the absence of heme this reaction is to slow to generate visible color change. And viola! While the clinical significance of this answer may vary, you do know that you patient has heme (and thus blood) present in their stool. 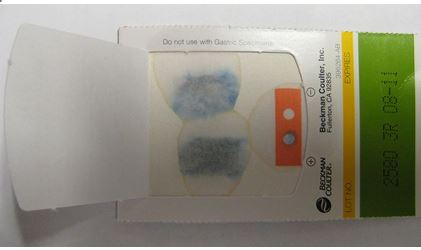 Except you’re not necessarily done yet. As with any test the result is prone to occasional false positive and false negative results. Although the reaction requires a catalyst (heme) to proceed promptly it does run without the catalyst present although at a significantly slower rate. As a consequence all stool guaiac tests should be read immediately since waiting a protracted period of time can lead to false positive results. False negative results can result from blood not being present in the stool sampled despite bleeding in the GI tract, often due to an insufficient time to permit blood to transit from the source of the bleeding to the rectum and lower sigmoid colon. In addition, vitamin C can lead to false negative results due to reducing properties of ascorbic acid. The presence of other reducing agents in the tested sample can also lead to false negatives. Your developer requires a viable concentration of the active reagent, hydrogen peroxide, to function and may yield negative results if expired. Developer should be checked and changed monthly per manufacturer recommendations.