Many new developments in ultrasound wereÂ demonstratedÂ at the ACEP conference in Denver this week. Since airwayÂ managementÂ rivals ultrasound as my academic interest, I’d like to focus for a moment on an intubating device I saw demonstrated at anÂ ultrasoundÂ vendor booth. Â I’ve seen lots of organs on myÂ ultrasoundÂ screen- hearts, gallbladders, eyeballs, prostates. I’ve even seen airway structures, but not like this: 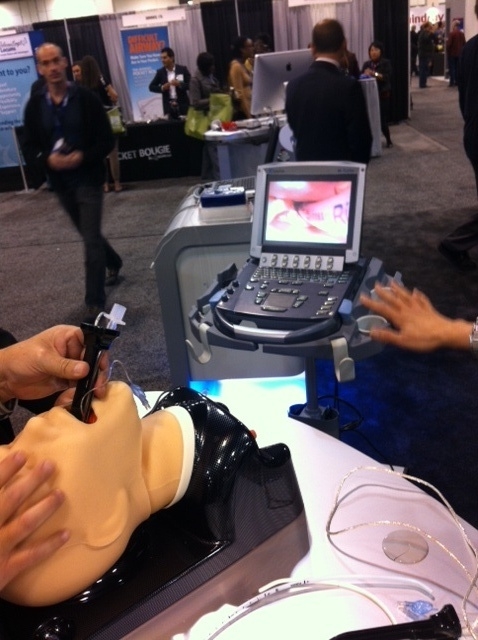 The VividTrac is a single use, USB video intubation device. It is a channeled blade video laryngoscope similar in concept to the King Vision or theÂ AirTraq Optical Laryngoscope. The channel is designed to pass the endotrachel tube through.Â This is in contrast to non-channeled video laryngoscopes like the Storz C-MAC or the Verathon Glidescope, where the endotracheal tube is guided with a stylet and not directed through the video device itself.

What is interesting about the Vivid device is it hooks up to a monitor using a standard USB cable. Thus, it can be connected to different types of monitors, PDAs orÂ tabletsÂ which accept USB input, or… an ultrasound machine monitor! Theoretically one could use an existing ultrasoundÂ machineÂ with a variety of probe types as well as a device like this.

There are many device manufacturers involved in R&D of devices which might lead to a technology convergence. Ultrasound probes, video intubation devices, cardiac monitoring equipment, etc. could all transmit images to aÂ monitor, via wires or wirelessly. Thus, pluripotent monitors could be used with a variety of devices depending on the needs of any given patient. This could increase the amount of information relayed via the monitors, and even what is transmitted to the electronic medical record. Importing vital signs, ultrasound images, EKGs, or other clinical images could all be captured in this way. It will be interesting to see how many other devices can learn to communicate with each other as the technology develops.