Chest pain: the bread and butter of emergency medicine. We see so many of these that it can be mind-numbing, and for EXACTLY that reason it’s critical to recognize those weird EKGs that aren’t an obvious STEMI but can signal a coronary occlusion.

One of the less-talked-about danger signs on EKG is “de Winter’s waves“, which is thought to represent acute LAD occlusion (similar to the more commonly known Wellen’s criteria):

These waves can look similar to the peaked T waves seen in hyperkalemia, but are typically isolated to the precordial leads, and that’s the tipoff.

de Winter’s waves should be considered a STEMI equivalent, and the patient should be taken for urgent cath or considered for thrombolysis if cath is not available.

Take a look at several examples below. Would you recognize these as a STEMI?

And this last is a particularly subtle (likely) example from Dr. Smith’s ECG Blog (hqmeded-ecg.blogspot.com/). Note the sagging T waves in v3 and v4, and tall T waves in v2/3 are clearly visible that outsize the associated QRS. This patient was unfortunately discharged after one negative troponin and was found dead 12 hours later. Read the full case here. 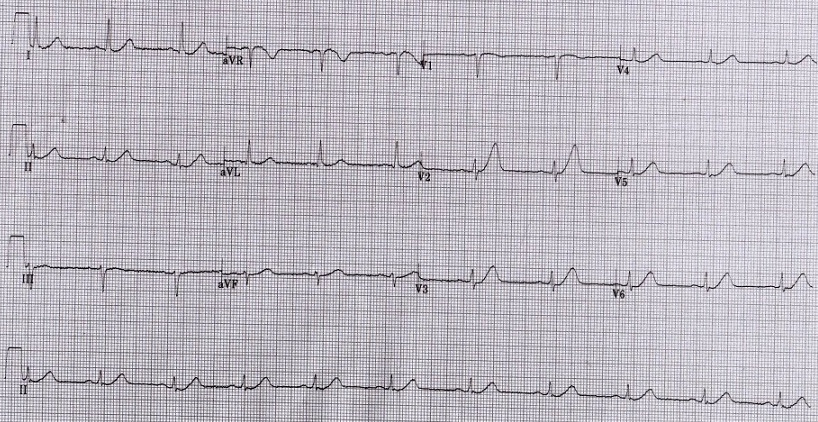 Adapted from Life in the Fast Lane and Dr. Smith’s ECG Blog.