An 18 year old female presents to the peds ED after an episode of witnessed syncope. Pt was hiking when had sudden LOC, no preceding symptoms.  She now feels well and denies CP and palpitations. No prior episodes. No OCP use or other PE risk factors. Her vitals and exam are normal. Her EKG from triage is here:

Based on this EKG, what do you think the cause of her syncope was? What is her ED management and dispo?

The patient presents with Long QT Syndrome (LQTS). Her QTc interval is about 600 msec shown here: 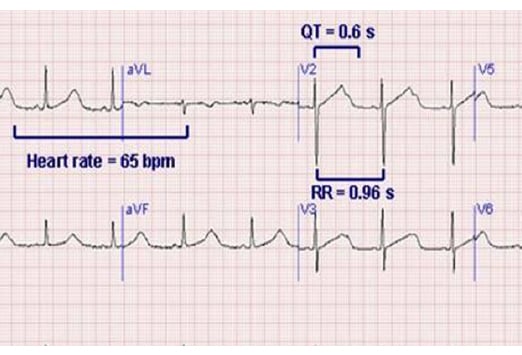 For females, QT >460 msec is abnormal (440 msec for males).
There are 10 known gene mutations associated with congenital LQTS. Several are autosomal recessive, meaning that carriers will have normal baseline QT intervals. But, interestingly, these carriers are sensitive to precipitants of QT prolongation (ie medications and electrolyte disturbances). The list of implicated medications is long, but commonly used ED drugs include: macrolides, zofran, amiodarone, phenytoin, methadone and ocreotide.

The channelopathies of LQTS predispose patients to Torsades de Pointes, which can deteriorate into ventricular tachyarrhythmias (causing her syncope).  If you see Torsades, give 2-4mg IV magnesium. Usually self-limiting, but overdrive pacing then synchronized cardioversion can be tried if mag is ineffective.

Obviously, given the syncope, this patient should be admitted to telemetry with cardiology/electrophys on board. First line prophylactic therapy is beta-blockade. High-risk patients may get AICDs.

Patients who are incidentally found to have LQTS don’t have to be admitted, but require good outpatient follow-up. First degree family members should be referred for outpatient work-up as well.