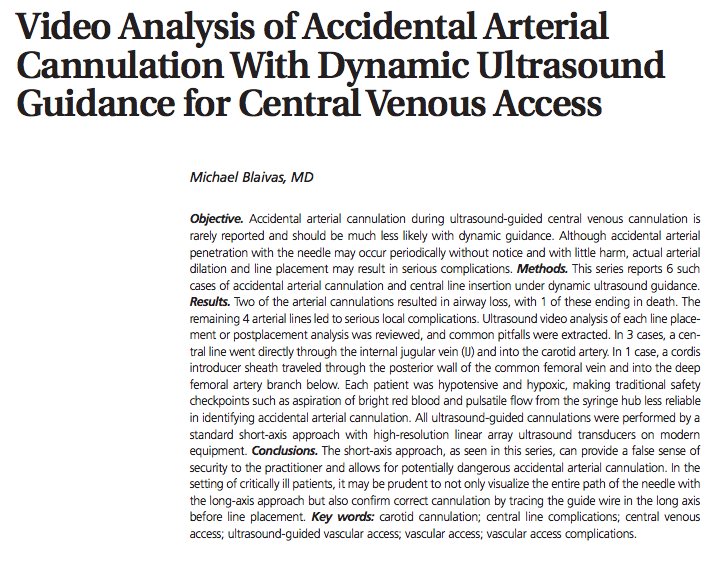 This month we reviewed two articles on ultrasound guidance for central access.Â  The first of these was an instructive case series by Mike Blaivas — Video Analysis of Accidental Cannulation with Dynamic Ultrasound Guidance for Central Venous Access: Michael Blaivas: J Ultrasound Med 2009; 28:1239â€“1244.

At the author’s institution, a continuous recording of ultrasound guidance is usually obtained for each central line placement.Â  This allowed him to perform a retrospective analysis of the video recording of 6 cases in which arterial cannulation occurred despite the use of ultrasound.Â Â  Arterial cannulation in these patients led to serious complication in 4 patients, airway compromise in one, and to death in the sixth.Â Â  The findings remind us of what we ought to already know and Dr. Blaivas offers suggestions to decrease the likelihood of these outcomes.

The author reminds us that short axis placement may be misleading.Â  That is, the hyperechoic part of the needle you are imaging inside a vein may actually be the midportion of your needle rather than the tip.Â  The tip may actually deeper, within unseen structures such as the carotid artery.Â  He concludes that it may be superior to cannulate the central vein using the long view, or at least to confirm placement of the guidewire in long view to confirm venous placement before dilation.

Would this publication change our practice? This report gave us all food for thought as our current policy regarding prevention of arterial cannulation includes measures which are largely post-dilation.Â  We agreed that there is little downside to checking the placement of the guidewire in long view prior to dilation.Â  Coupled with manometry prior to dilation, long view provides the best evidence that your placement is correct. 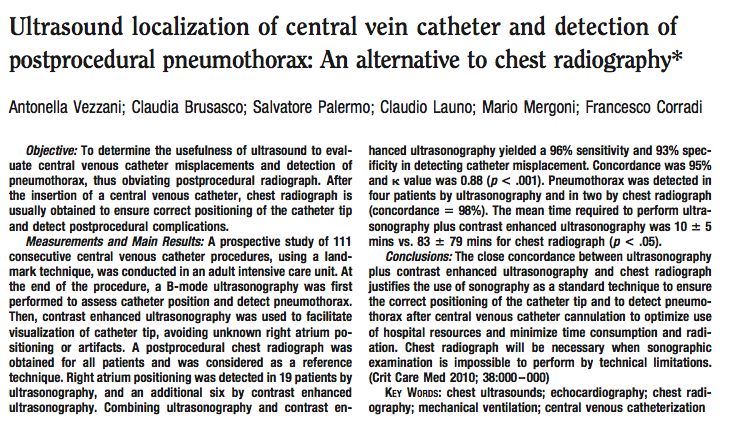 Thanks to Eduardo LaCalle for his excellently summary and critique of the second article — Ultrasound localization of central vein catheter and detection of postprocedural pneumothorax: An alternative to chest radiograph: Vezzani et. al. : Crit Care Med 2010 Vol. 38, No. 2.

Dr. Vezzani, et. al., set out to look at confirmation of line placement via another route — CXR vs. US.Â  This was a prospective diagnostic study performed in the ICU of a large hospital (1200 beds) in Parma, Italy. They looked at all ICU patients older than 18 over 6 months. What they did was to place central line by landmark technique. Then each patient had ultrasound, including contrast enhanced ultrasound (CEUS) as well a cxr. The contrast was provided by agitated saline (9cc saline with 1 cc air). These studies were performed by a single sonographer. Appropriate SVC placement was indicated by laminar flow of bubbles seen in the RV on CEUS via subxyphoid view. RA/IVC placement was indicated by the tip seen in the RA or turbulent flow implying that the agitated saline was being infused directly into the RA. IJ placement was implied by a >2 second delay to appearance of bubbles during CEUS. In addition US was used to check for PTX.

Would this publication change our practice? Well there are some limitations to this study that give pause. First of all, the CEUS exams were performed by a single sonographer, the first author of the study. This suggests that technical proficiency may play a significant role here – similar results may not be easily achievable by your average EP.Â Â  On the other hand, the gold standard for confirming catheter placement or pneumothorax in this study, CXR, is known not to be without fail .Â  I would be loathe to drop the CXR confirmation based on this single study.Â  However, there is clearly a role for ultrasound in line confirmation and it probably ought to be added to CXR, especially to look for pneumothorax.