Turns out most things in medicine are about acid-base disorders. A vent, understanding sepsis, kidney failure, respiratory failure, toxicology: so much of diagnosis and management alike comes down to acid-base. And while we’re not going to talk too much about equations, most of that stuff is buried deep in our VBG. So let’s feel like the bad**s emergency medicine doctor that we are, and master the VBG.

Every enzyme in the body functions at an ideal pH and when this pH is too high or low (because of underlying pathology, ingestion, etc), our cells stop functioning, leading to cell damage, organ failure, and death.

In the most simplistic terms, think about acidosis (pH < ~7.35) as worrisome, resulting from a dangerous metabolic derangement (MUDPILES) or from respiratory failure. Think about alkalosis (pH > ~7.45) as slightly less worrisome, resulting from electrolyte depletion from GI / GU loss (a metabolic issue) or from rapid breathing secondary to anxiety, pain, fever (or, okay, head trauma or brain tumors).

The body tries to maintain the ideal pH of 7.35-7.45 even when there is an underlying derangement causing acidosis or alkalosis, and this compensation is largely done by the lungs and kidneys. The lungs can work quickly to increase the respiratory rate and blow off the acidic gas carbon dioxide, helping decrease a basic pH. The kidneys produce the basic byproduct Bicarbonate and work more slowly (hours to days), ultimately creating a buffer than can stick around to neutralize acidosis.

The venous blood gas panel is one of the most useful tools we have to help us understand why the pH is deranged, and gives us information we don’t get from other laboratory panels. Specifically we can get a huge amount of information from the pCO2, bicarb, and lactate.

pCO2: The partial pressure of carbon dioxide is a measured (ie, real) value on the VBG and can help to determine the respiratory status of a patient, or to adjust the vent in a patient who is intubated. On the VBG, a pCO2 of about 40 (40- 50) is considered normal, though people who have COPD might have a much higher baseline pCO2. Lower than normal CO2 likely indicates that a patient’s breathing is fast and that they are blowing off CO2. Higher than normal CO2 likely indicates that a patient is breathing slow, shallow, or exhaling inadequately, thus retaining CO2..

Keep in mind that patients can be breathing faster than baseline pathologically (ie, hyperventilation in the setting of anxiety) or as a compensation mechanism (ie, trying to blow off carbon dioxide in the setting of lactic acidosis). It is important to analyze the pCO2 in the context of a patient’s pH in order to be able to fully understand the patient’s disease process.

Notably, the VBG historically has been thought to be able to answer the question: “is the patient retaining CO2” with a yes or no. It was thought that above ~45, the pCO2 on a VBG was not accurate enough to determine the extent of retention. However, as Dr. Zikry pointed out in his TR Pearl from October 2021, there is bountiful recent evidence that shows that the ABC and the VBG are actually quite consistent with each other. Most studies show that pCO2 is only 4-6mmHg higher on the VBG than on the ABG. However, in severe shock, when peripheral vessels tend to be very constricted, the discrepancy between the ABG and the VBG is much greater. Severe shock, therefore, might be one of the circumstances we still need to get the ABG in the emergency department.

A quick note on Bicarb: On the VBG, bicarb (reported as “HCO3”) is a value that is calculated from the pH and pCO2 using the Henderson-Hassleback equation. It is a rough estimate of what healthy kidneys would be expected to do given a patient’s measured pH and pCO2.

On the BMP, bicarb (reported as “CO2”) is a measured value. This means that the bicarb as reported on the BMP can tell you what the kidneys are actually doing. By comparing the VBG bicarb (HCO3) and the BMP bicarb (CO2), you can get an idea of whether the kidneys are functioning as they should be and compensating for whatever acid-base derangement might exist.

Lactate: Inherent to cellular survival is energy production. Usually, the body uses oxygen to produce ATP, which is the main energy source. However, in certain circumstances, cells will turn to anaerobic metabolism and make lactate instead of ATP to use as fuel. This lactate production ultimately makes blood more acidic. 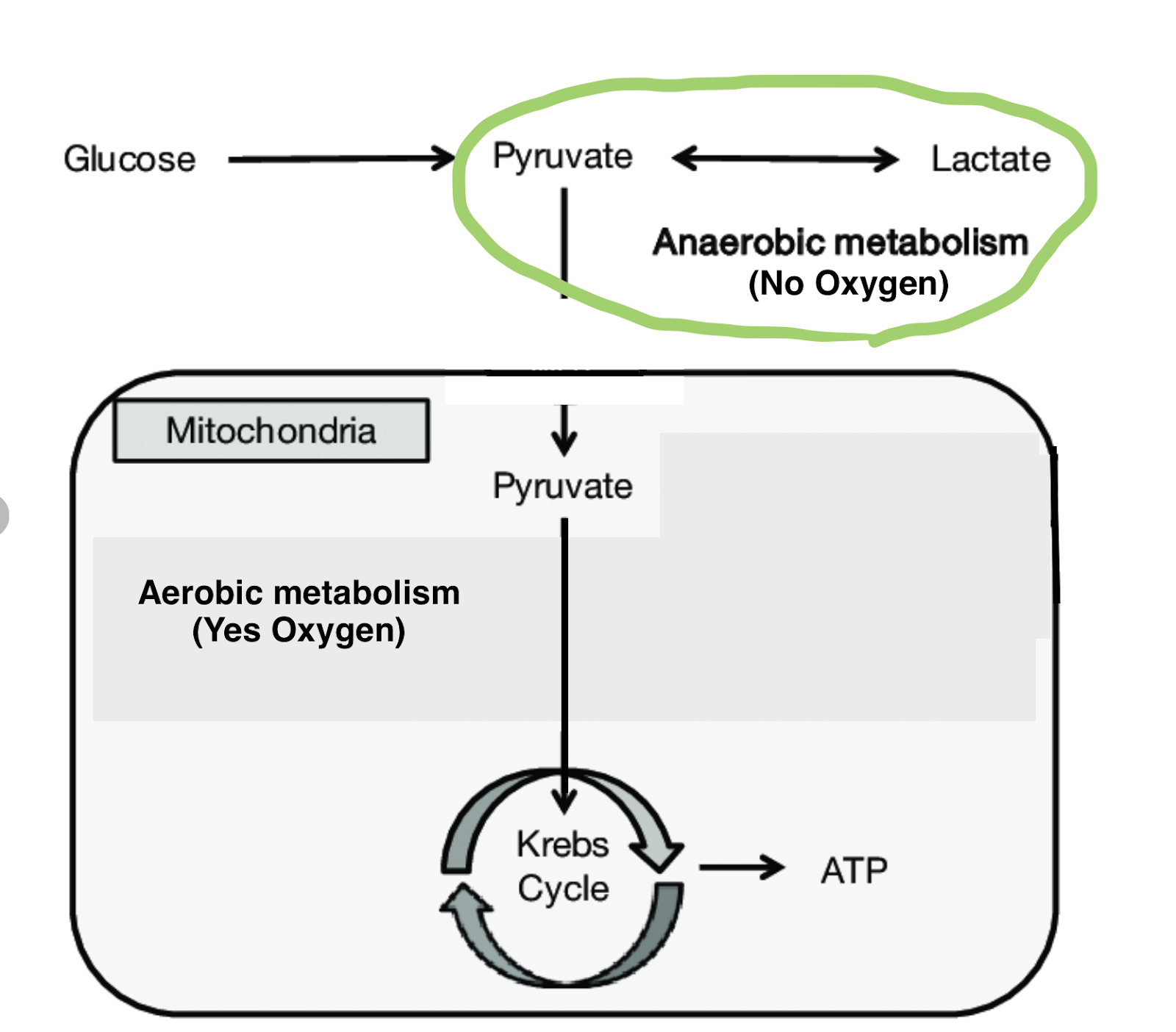 (If you’re curious how lactate production causes blood to be acidic, converting pyruvate to lactic acid and ultimately to lactate results in the creation of a hydrogen ion, which in turn neutralizes bicarbonate, removing the blood’s basic buffer, causing it to become acidotic. The term “Lactic acidosis” refers to the neutralization of enough of the bicarb supply that blood begins to become acidotic.)

Lactate production is frequently due to global hypoperfusion in the setting of sepsis, ischemia, or hemorrhage and lactate is often used as a quick and dirty lab value to deduce how sick a patient is. However, it is important to note that lactate doesn’t necessarily always equal global hypoperfusion. There are two types of lactate build up:

Type A Lactic Acidosis: This form of lactate acidosis is what we classically think of– there is increased lactate production in the setting of tissue hypoperfusion, requiring tissues to rely on anaerobic respiration. This can be due to:

When you see an elevated lactate, think critically about the patient’s clinical picture.

Other values reported in the VBG: I use the other values on the VBG less frequently, and many are reported more accurately in other lab panels. Nonetheless, it can be helpful to use them as a quick screen before your other labs result, and to generally know what the ones not reported elsewhere refer to.

Over time, these values will start to make conceptual sense and interpreting the clinical context of a patient in respiratory distress will become much easier. Is the VBG consistent with someone in the midst of an acute COPD exacerbation? Is the patient’s tachypnea a compensatory mechanism secondary to salicylate overdose? Do you need to increase the respiratory rate on their vent?