Quantitative end tidal: Partial pressure of CO2 in the gas sample at the end of expiration. You get a numeric value and a wave-form. EtCO2 is typically lower than PaCO2 due to anatomical and pathological dead space. Normal EtCO2 range is about 35-40 mmHg.

Role in Intubation: End tidal is used as the gold standard for confirmation of endotracheal tube position. Esophageal intubation can initially produce an EtCO2 due to gastric CO2 however this should taper after a few breaths. Right main-stem intubation may still have a normal EtCO2, so get a CXR to confirm optimal tube positioning.

Role during Cardiac Arrest: EtCO2 > 20 suggests good quality CPR. If it starts to drop, consider switching compressors or making sure the LUCUS is in the appropriate position. A sudden increase in EtCO2 greater than 10 from the patient’s baseline can be an early indication of ROSC.
Role during Procedural Sedation: Monitors for hypo-ventilation and apneic events allowing for early intervention. If equipment for EtCO2 monitoring is available, use it!

What is EtCO2? It is a measurement of the partial pressure of CO2 in the gas sample at the end of expiration. It provides a numeric value of exhaled carbon dioxide. It is affected by ventilation, pulmonary perfusion, and CO2 production.

Let’s talk about our lovely hard-working functional alveoli – doing their thing and ventilating our bodies. Remember, blood flows to the alveoli, and boom – gas exchange occurs. The CO2 pressure in the alveoli should roughly match the arterial CO2 (PaCO2). 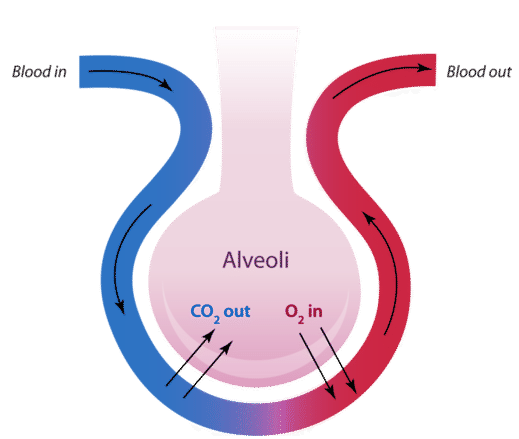 However as we expel air out of our lungs it encounters anatomic dead space (trachea/bronchi). This dead space (not very hard-working) does not help clear CO2 since it does not participate in gas exchange. The gas from the alveoli during expiration is being diluted with the gas in the dead space (roughly 150cc). As a result, EtCO2 value is typically lower than PaCO2. Normal EtCO2 range is about 35-40 mmHg.

In a healthy patient with healthy lungs the difference between the EtCO2 and PaCO2 is usually less than 10mm. However in patients with lung disease, pathological dead space can increase this gap. 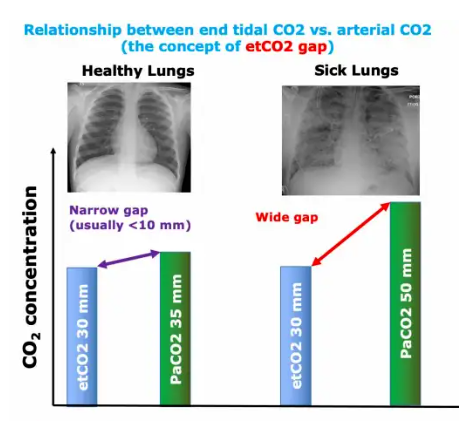 Interpreting the waveform: When your patient is connected to end-tidal, you can interpret what you see on the monitor by looking at the various phases.

Phase I: Baseline should be 0 mmHg. 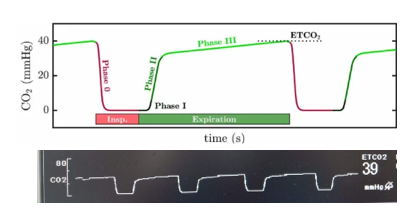 There are so many different capnography waveforms, depending on the patient’s physiology and pathology. I have included some interesting ones below. 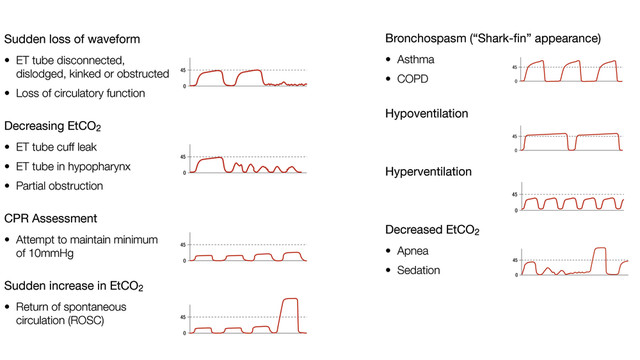 Tube Confirmation during Intubation: EtCO2 is the gold standard used to confirm endotracheal tube placement in the trachea and to monitor effective ventilation post intubation. If the tube is in the right place, you should have EtCO2 with a good waveform on the monitor. Esophageal intubation can initially produce an EtCO2 due to gastric CO2. However, this should taper after a few breaths.

Also important to note: right main-stem intubation may still have a normal EtCO2, so get a CXR to confirm tube positioning.

EtCO2 monitoring during Cardiac Arrest: EtCO2 can be used as a reflection of quality of CPR (optimal depth and rate) and may indicate prognostication for ROSC. EtCO2 became a level 1 recommendation by AHA in 2010 for tube confirmation in patients undergoing CPR. Remember that in an arrested patient, lung perfusion and gas exchange at the level of alveoli is not occurring. Therefore EtCO2 will drop. However if you are giving good quality compressions you can get adequate blood flow to the lungs to produce a measurable EtCO2. EtCO2 > 20 suggests good quality CPR. EtCO2 less than 10 suggests inadequate CPR or a low likelihood of survival at the 20 min mark. A sudden increase in EtCO2 greater than 10 from the patient’s baseline can be an early indication of ROSC.

His reasoning is that pulse ox saturations take time to drop, especially if you are providing supplemental oxygen. Oftentimes we provide supplemental oxygen for passive oxygenation to prevent desaturations in the case the patient hypoventilates or becomes apneic during procedural sedation. In this case, the pulse ox may not desat immediately and it can be helpful to know early when you should stimulate the patient, jaw thrust them or get the BVM ready if the EtCO2 drops to 0. Being the black cloud that I am, this of course has happened to me. If you are working in an emergency department that has capabilities of measuring EtCO2, it can be a very helpful tool to monitor ventilation during procedural sedation!

Set up: As the PGY-2s transition to the trauma airway, cardiac and resus role, make sure you have this in each of your bays. At Sinai you put together the equipment by gathering the green water trap + gas sampling line + airway adaptor. 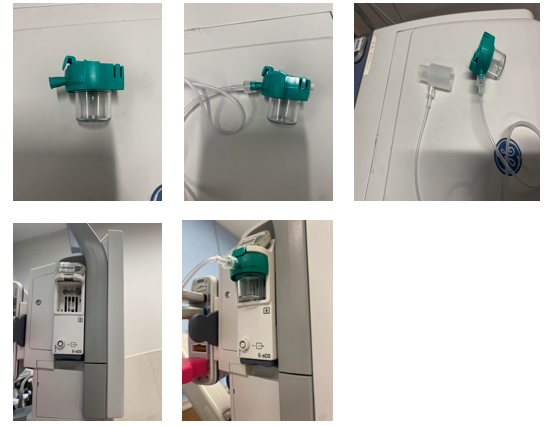 At Elmhurst, you simply remove the end tidal tubing from the package and twist it onto the monitor, and you’re done! 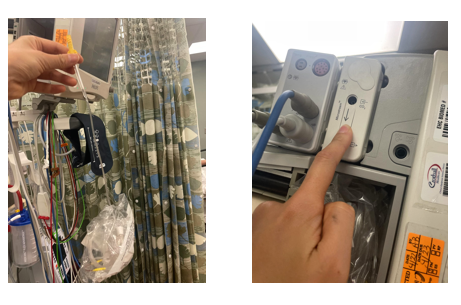