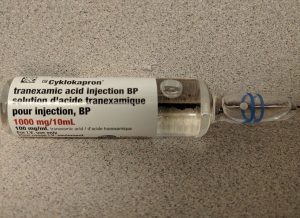 Pearl: TXA can be used for post-partum hemorrhage. Its utility for other forms of gynecologic bleeding is unclear.

Background: TXA (Tranexamic Acid) now has an established role in controlling the hemorrhagic shock of a trauma patient after the CRASH-2 trial. I recently cared for a patient who presented in acute distress with a vaginal (uterine) bleed, an INR of 3.7 (hepatic coagulopathy) and a hgb of 2.5 mg/dl. Having heard that TXA may be applicable to uterine bleeding, I administered it in tandem with the MTP. Now I want to know if there is evidence supporting that decision.

Evidence: A review article in Obstetrics and Gynecology (an ACOG Publication) by Pacheco et al described multiple recent RCTs and a Cochrane review of the two major peripartum applications for TXA: Prophylactic administration prior to C-section and post-partum administration (in tandem with oxytocin) for hemorrhage. There appears to be good evidence for reduction of patient centered negative outcomes (i.e. death from hemorrhage), especially when given within 3 hours of hemorrhage onset (in parallel to the trauma literature). There is no evidence of increases in pro-thrombotic events.

Bottom Line: Though the evidence does support the use of TXA in a hemorrhaging post-partum woman (along with oxytocin), the time window appears to matter (under 3 hours). There is not adequate data to support its use for uterine bleeding which has been ongoing for a longer period of time prior to presentation (as in my patient). However, given its overall safety profile, it may be reasonable to use it as a single dose in acutely life threatening non-traumatic hemorrhage scenarios where any potential benefit would be of value.