Today’s TR pearl is brought to you by Drs. Shearer, Hernandez, Sun and O’Halloran and summer in the Northeast.

The weather is warm and people are flocking to the great outdoors. This means…ticks, as well as the tick borne diseases they may carry. For how to remove a tick, see Dr. Paulis’s excellent clinical pearl here.

This pearl will be a general review on the various types of tick borne illnesses and what kind of work up they require. 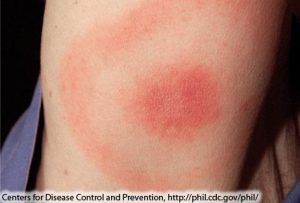 Presents with fever, chills, sweats, malaise, fatigue, myalgia, arthralgia, headache, GI symptoms, dark urine. Less common symptoms include cough, sore throat, emotional lability, depression, photophobia, and conjunctival injection. Mild splenomegaly, mild hepatomegaly, or jaundice may occur in some patients. Laboratory findings include decreased hematocrit due to hemolytic anemia, thrombocytopenia, elevated serum creatinine and BUN, mildly elevated LFTs. Diagnosis is confirmed by identification of intraerythrocytic Babesia parasites by lightmicroscopic examination of a peripheral blood smear; positive Babesia (or B. microti) polymerase chain reaction (PCR) analysis; or isolation of Babesia parasites from a whole blood specimen by animal inoculation (in a reference laboratory). For ill patients, babesiosis usually is treated for at least 7–10 days with a combination of two medications—typically, either atovaquone 750mg q12h  PLUS azithromycin 500–1000 mg on the first day and total daily dose in the range of 250–1000 mg on subsequent days; OR clindamycin 300–600 mg IV every 6 hours OR 600 mg orally every 8 hours PLUS quinine 650 mg orally every 6–8 hours(this combination is the standard of care for severely ill patients). Duration of treatment should be 7-10 days.

Presents with fever, shaking, chills, severe headache, malaise, GI symptoms, cough and in rare cases, a rash. It presents similarly to erlichiosis but the two diseases are transmitted by different tick vectors and occur in different geographic areas. Laboratory findings include mild anemia, thrombocytopenia, leukopenia (characterized by relative and absolute lymphopenia and a left shift); mild to moderate elevations in LFTs may occur in some patients. Visualization of morulae in the cytoplasm of granulocytes during examination of blood smears is highly suggestive of a diagnosis. The diagnosis is confirmed by detection of DNA by PCR of whole blood (most sensitive during the first week of illness) or demonstration of a four-fold change in IgG-specific antibody titer by indirect immunofluorescence antibody (IFA) assay in paired serum samples. Treatment is doxycycline 100mg BID. Patients with suspected anaplasmosis infection should be treated with doxycycline for 10-14 days to provide appropriate length of therapy for possible incubating co-infection with Lyme disease.

Presents with fever, headache, chills, malaise, muscle pain, gastrointestinal symptoms (nausea, vomiting, diarrhea, anorexia), confusion, conjunctival injection, rash (more commonly reported among children). As noted above, erlichiosis and anaplasmosis can have similar clinical presentations. Laboratory abnormalities are typically observed during the first week of clinical disease: thrombocytopenia, leukopenia (absolute), anemia (generally occurs later in illness than thrombocytopenia or leukopenia ), and mild to moderate elevations in hepatic transaminases.During the acute stage of illness, morulae can be detected in about 20% of patients. E. chaffeensis most commonly infects monocytes, whereas E. ewingii more commonly infects granulocytes. Also similar to anaplasmosis, the diagnosis is confirmed y detection of DNA by PCR of whole blood (most sensitive during the first week of illness) or demonstration of a four-fold change in IgG-specific antibody titer by indirect immunofluorescence antibody (IFA) assay in paired serum samples. Treatment is doxycycline 100mg BID. Patients should be treated for at least 3 days after the fever subsides and until there is evidence of clinical improvement. Minimum course of treatment is 5–7 days.

RMSF
Presents with fever, chills, severe headache, malaise, myalgia, GI symptoms, photophobia, focal neurologic deficits, including cranial or peripheral motor nerve paralysis or sudden transient deafness. RMSF also presents with a very classic maculopapular rash with small, flat, pink, non-itchy spots (macules) which initially appear on the wrists, forearms, and ankles then spread to the trunk and sometimes palms and soles. Rash typically appears 2–5 days after the onset of fever. Red to purple spots (petechiae) are usually not seen until day 6 or later after onset of symptoms. Petechial rash is considered a sign of progression to severe disease. Every attempt should be made to begin treatment before petechiae develop. 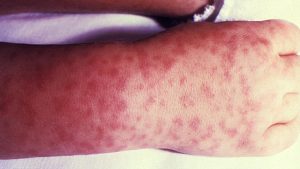 Laboratory findings include thrombocytopenia, mildly elevated hepatic transaminase levels, hyponatremia. Diagnosis is made by detection of DNA in a skin biopsy specimen of a rash lesion by polymerase chain reaction (PCR) assay or in an acute phase whole blood specimen, immunohistochemical (IHC) staining of organism from skin or tissue biopsy specimen or demonstration of a four-fold change in IgG-specific antibody titer by indirect immunofluorescence antibody (IFA) assay in paired serum samples. RMSF is also treated with doxycycline, 100mg BID for at least 3 days after the fever subsides and until there is evidence of clinical improvement.