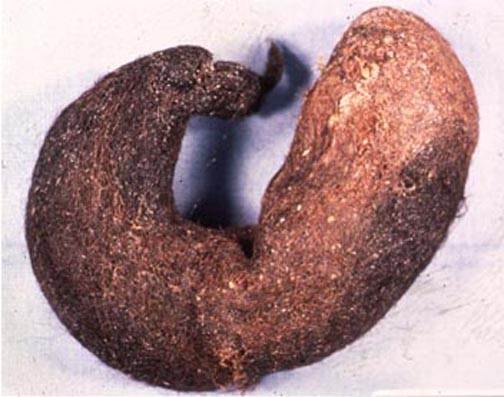 A 45 year-old female with hx of anemia presents to your ER complaining of 2 days of abdominal pain with nausea and several episodes of dark emesis but otherwise conversant and non-toxic in appearance.  She has not passed stool or flatus for 1 day.  She reports that she recently felt fatigued and too a large extra dose of her prescribed iron supplements in order to “make up the difference”.  Her serum iron levels return at 200 mcg/dL on two separate tests over 6 hours.  You know toxicity typically begins at 300 mcg/dL with GI symptoms and some systemic symptoms, progresses to notable systemic toxicity with shock above 500 mcg/dL)  suspecting that her iron alone does not account for her symptoms you order a KUB film that demonstrates the following image.

Clearly seen is an iron bezoar.

Bezoars consist of concretions of foreign matter which form in the stomach and come in a 4 main categories:

Bezoars present with nausea, vomiting and abdominal pain.  They can form at any location along the GI tract although the most common site is the stomach.  Bezoars can lead to obstruction and can result in the formation of strictures if they are not cleared.  Pharmacobezoars can sequester medications and lead to both delayed and unpredictable release.  This can prolong the toxidrome of an ingestion due to the presence of medication constantly eluted into the GI tract and absorbed.  As bezoars are subject to mechanical forces from the stomach they can disintegrate leading to sudden unexpected spikes in serum levels.

Risk factors for pharmacobezoar formation include large numbers of pills ingested, enteric-coated or delayed release preparations, aberrations in stomach pH, and the presence of strictures or adhesions.

Bezoars that do not resolve with conservative management must be removed endoscopically.  If this fails the next line of therapy is surgical intervention.  The more toxic the substance forming the bezoar, the more important it is to remove it promptly.