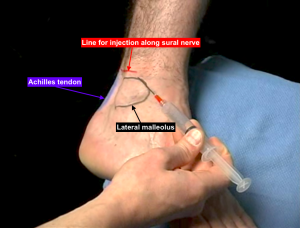 The next three series in the SinaiEM pearls will be on nerve blocks of the foot. Today is going to cover the sural nerve block which should anesthetize the area depicted by the cross-hatched area in the figure.

As a terminal branch of the sciatic nerve, the sural nerve innervates the lateral portion of the distal lower extremity and lateral foot. We recorded one successfully placed today where the patient had localized pain/tenderness at the lateral malleolus. You can appreciate the hyperechoic nerve floating in the bath of hypoechoic anesthetic. Consent was given for the video.

As depicted in the drawing above, the anatomical distribution of the sural nerve runs in the posterolateral area of the lower extremity.

Injection site – Injection occurs at the site depicted in the drawing just posterior to the lateral malleolus.

Thanks to Felipe Teran for the inspiration and the instructional demonstration.