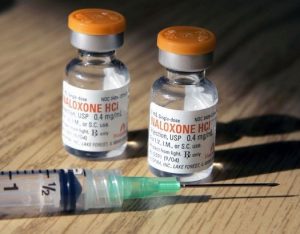 You are called to triage to assess a man for shortness of breath. Per EMS, this is a 46 year old male with a history of substance abuse and HTN, found by his wife this afternoon, overdosed on Heroin and barely breathing. EMS arrived on scene to find him unconscious, with a RR of 5 and pinpoint pupils. IV access was established and EMS gave 4mg of Narcan IV 30 mins prior to arrival. The patient became very responsive (and angry) after Narcan administration, however has now arrived to triage c/o shortness of breath. Vitals at triage: BP 182/110, HR 117, Sp02 88%, RR 36. He is diaphoretic and appears in respiratory distress. On exam he has rales to his apices. What went wrong?

Treatment: Mainly supportive. Treat these patients the way you would any patient with flash pulmonary edema; positive pressure (bipap), and diuresis (Lasix). These patients should also be evaluated for underlying cardiac disease and/or pulmonary pathology before you blame the Narcan. Meaning EKG, CXR, troponin. They may have a mildly elevated troponin from demand during the catecholemine surge and increased circulating plasma epinephrine.

Dispo: Admission vs Observation. It depends on clinical status, cardiac history, and other medical co-morbidities.

References: There is scant literature and case reports of pulmonary edema caused by Narcan. No prospective research or retrospective cohort studies.