Welcome to Digoxin Day, Part 2! Like all sequels, this is sure to be even better than the original.

Recall from yesterday that digoxin increases the amount of available calcium inside the cardiac myocytes. That causes an increased resting potential inside the cells, and shortens the repolarization time. This is reflected on the ECG as a short QT interval.  The ST segment looks “scooped out,” causing the well-known “Salvador Dali mustache” morphology known as “digitalis effect.” Remember that seeing digitalis effect on the ECG does NOT imply toxicity – only that the patient takes digoxin. 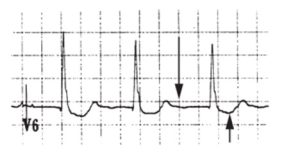 Digoxin can cause nearly any dysrhythmia. It will never cause a conducted SVT (remember that conduction through the AV node is depressed), but nearly anything else is fair game. These arrhythmias may be complicated, due to digoxin’s dual effects of increased automaticity and decreased conduction through the AV node. Atrial tachycardias, atrial flutter or atrial fibrillation with AV block (see ECG 1 below), PVCs, ventricular bigeminy, ventricular fibrillation, junctional tachycardias, high degree AV blocks, sinus bradycardia, and AV dissociation may all be seen. Bidirectional ventricular tachycardia, while rare, is nearly diagnostic of digoxin toxicity (see ECG 2 below). 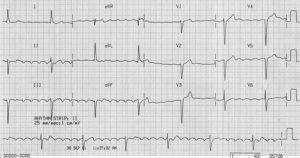 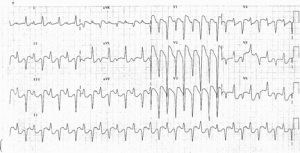 And, as a bonus – mentions of digoxin/foxglove in pop culture: