Codeine is bad for children

Despite warnings by the FDA in 2013 to stop prescribing codeine to children due to the risk of respiratory depression and death, a study to be released this week in Pediatrics indicates that 5% of children post-tonsillectomy/adenoidectomy are still being prescribed this medication.

Why is codeine so dangerous?

Codeine is metabolized to morphine in the liver by the P450 CYP 2D6 enzyme. This process is highly variable and depends on the number functioning alleles of this enzyme an individual possesses. This number of alleles can range from none to 2(most people) or more duplicate copies. Patients with more than 2 copies of this allele are known as rapid metabolizers or ultra metabolizers. As the name suggests, these patients  rapidly convert the codeine into morphine.This quickly increases the plasma concentration of morphine and leads to its toxicity: respiratory depression/death. 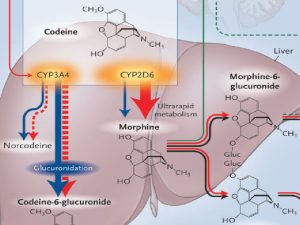 A literature review by Llerena et. al. estimated prevalence of the these rapid metabolizer phenotype are the following: Caucasian <1%-10%, Mediterranean 10%, Asian or Middle Eastern 10-30%, and Ethiopian 30%.

Bottomline: the risk of adverse events from codeine use in children are high and children should not be prescribed this medication.