What we already know about the topic: Pulmonary embolism has a high mortality if untreated. Determining pretest probability and using high negative predictive value of d-dimer may simplify diagnostic process.

Brief overview of the study:

The study design was a prospective cohort study in 4 Canadian hospitals. Patients were evaluated by 1 of 43 ED physicians who used Wells Criteria to determine a pre-test probability of pulmonary embolism. For each patient, a D-dimer test was also performed.

Inclusion: suspicion of PE, symptoms for <30 days, acute onset of new or worsening shortness of breath or chest pain

There were 930 patients in the study. Each patient was evaluated with the same diagnostic algorithm (see figure). For patients with a low pretest probability and a negative D-dimer, no further tests were done and were given the diagnosis of PE excluded. For all other combinations of pretest probability and d-dimer, patients undergone VQ scans and the diagnosis of PE excluded was given further down the algorithm. After 3 months, patients were followed up for development of thromboembolic events.

5/849 patients had the diagnosis of PE excluded at one point of the algorithm developed PE or DVT during follow-up. However, 4 of these patients had not undergone the proper diagnostic protocol.

1/ 437 patients who had the initial diagnosis of PE excluded developed PE during follow up. The negative predictive value for combining low Wells score and negative D-dimer is 99.5% (CI, 99.1% to 100%)

CTA has replaced VQ scan, because CTA has better sensitivity and specificity. Maybe the miss rate of thromboembolic events would be higher if CTA was used. 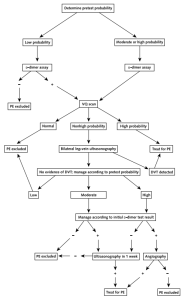