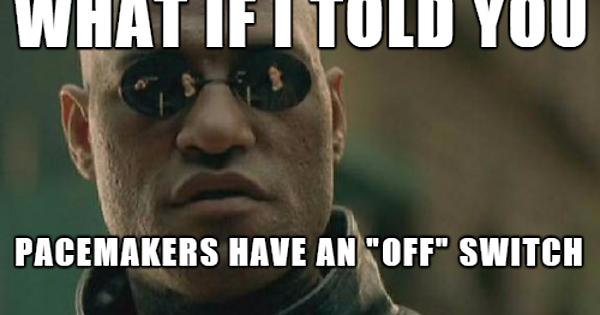 Today we will review complications associated w/ implanted pacemakers that you may encounter in the ED and thus ought to be familiar with.

Generally, complications can be divided into two categories: early vs. late

Infection is another potential complication.  device-associated endocarditis is very rare, but within the realm of possibility and requires echocardiography, blood cultures, and prolonged antibiotics.

Lead displacement is also possible and may present with palpitations, dizziness, or presyncope as a result of a nonfunctional pacemaker (i.e. symptoms of whatever disease required a pacemaker in the first place).  EKG changes, such as axis deviation or a change from LBBB to RBBB pattern is also suggestive of lead displacement or migration.  Device interrogation and echocardiography are required to make a diagnosis.

Failure to capture is a pace signal without subsequent myocardial depolarization.  This can be caused by lead displacement, heart disease, electrolyte disturbance, medications, or a delivery of an impulse during refractory period.  Note pacer spikes w/out subsequent QRS complex below.

Failure to sense occurs when the device does not sense myocardial depolarization.  Failure to pace occurs when the device does not provide stimulus to the when it is supposed to.  This occurs most often due to oversensing (e.g. the device is too sensitive and recognizes myopotentials from adjacent muscle tissue such as rectus abdominis or pectoralis as myocardial depolarization).  It can also occur from lead fracture.  Patients with this problem often present with inappropriate bradycardia.

Pacemaker-mediated tachycardia is a re-entrant tachyarrhythmia (cf. AVNRT, WPW) in which the device itself forms the accessory pathway in the reentrant circuit.  It results in a wide complex tachycardia and symptomatic patients should have a magnet placed over the device to interrupt the reentrant loop.

All patients with symptoms suspected to be secondary to pacemaker malfunction should be evaluated with an EKG and chest x-ray to ensure appropriate capture and lead placement.  Echocardiography, device interrogation, and electrophysiology consultation should also be considered.