The last time www.sinaiem.org addressed the topic of cerumen (ear wax) impaction was in 2013. See this post: http://sinaiem.org/50yo-man-with-chest-pain-and-also-with-r-ear-pain/

If you’re like me, you likely believe that the world of cerumen impaction is a rather static one. Given that, another post on cerumen impaction would seem to be duplicative…Well you (and I) are wrong, and here’s why:

in 2017 the American Academy of Otolaryngology – Head and Neck Surgery released new guidelines for the management of cerumen impaction.

Major Changes from the prior guideline that are relevant to EM include:

If that’s all TL:DR , here are the important EM takeaways:

In the symptomatic patient, the goal of intervention is to help alleviate or relieve the symptoms (pain, fullness, hearing loss, tinnitus, etc).

In the asymptomatic patient with impacted cerumen, the goal is to allow visualization of the ear canal and the tympanic membrane or perform audiometric or vestibular evaluations.

Several methods for achieving these goals are widely used. However, evidence in the literature that clearly identifies the superiority of one therapeutic option versus another is lacking.

The three most effective therapeutic options that are widely used:

(1) irrigation, (2) cerumenolytic agents, and (3) manual removal requiring instrumentation. Combining ≥1 of these options on the same day or at intervals is routinely used in everyday practice. There are no comparative randomized clinical trials addressing the relative effectiveness of the 3 methods.

Interventions that are not appropriate for cerumen removal:

What are the various types of cerumenolytic agents?

How should I distill my infinite cerumen knowledge so that the patient and I arrive at the right treatment for them:

Shared decision making to the rescue, see Grid below: 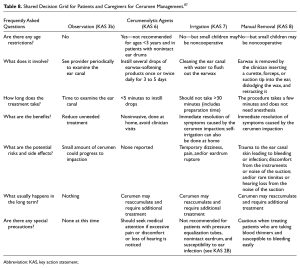 I’ve had pretty decent success using a 60cc syringe and attaching a cut off 20 gauge IV catheter (cut so that it can’t perforate the TM), filling it with tepid water, and then attempting high pressure irrigation. Repeat PRN.

Since there’s not a whole lot of evidence suggesting a difference between manual removal, irrigation, and cerumenolysis.. I’ll probably just keep doing that. What about you?