Thoracic ultrasound is a rapidly emerging area of point-of-care sonography. There are several diagnoses which can be readily assessed using thoracic sonography:

Different authors debate the use of several different probe types. Curvilinear or microconvex array probes are most commonly used, though some advocate a liner probe. There are also multiple published protocols on probe placement along the chest wall. Here we will describe the zones used by Daniel Lichtenstein in his BLUE protocol:

The probe is held in a longitudinal orientation with the marker towards the patient’s head. Look in between the ribs in each zone to see the bright white horizontal line of the pleura. The ribs will cast anechoic shadows vertically. When imaged with the probe perpendicular to the pleura, reflections of the pleural line known as A-lines should be evident in normal lung:

Several studies demonstrate an excellent correlation of B-lines with congestive heart failure, and that B-lines can be seen to disappear within hours of appropriate therapy.

Thoracic sonography can detect small amounts of fluid in the costophrenic angle, even in supine patients. It is thus well-suited to intensive care and emergency department applications where patients cannot easily be moved. Hold the probe in the right or left upper quadrant as you would when performing a FAST examination: 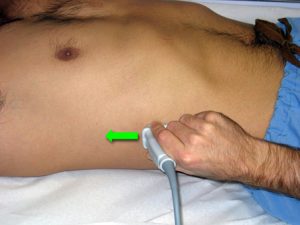 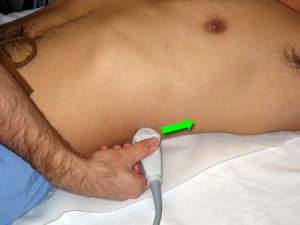